Overlord of the Media Dimension

Bruce Robertson
Mitsuo Senda (JP, ETG)
Rez, named Ranald (ラナルド Ranarudo) in Spin Tail, is a megalomaniac, cybernetic entity, and the main antagonist of the series; he is also the arch-nemesis of Gex. His one true ambition is to control the entire Media Dimension under his own rule and ensure the longevity of bad TV shows and Z-Grade movies. He leads an army of various TV characters from different TV worlds which is where his nickname "Lord of the Media Dimension" came in. He also has a collection of Star Trek bloopers, according to Xtra (whom he kidnapped in the third game to get to Gex).

In Gex, Rez tried to make Gex his network's mascot. When Gex defeated Rez, Rez lost his power over the Media Dimension. In Gex: Enter the Gecko, Rez was trying to take over what he lost in Gex and restart his empire.

In Enter the Gecko Rez's fight takes place in none other than Rezopolis. Rez employs several weapons against Gex which include homing missiles and eye lasers. Rez also reveals to Gex that he is his father. This is debatable, as it could just be a reference to Star Wars, and Gex even makes a snide comeback to this. In Gex 3: Deep Cover Gecko, he also has a target on his chest when it is revealed, which is his weak spot. After he is defeated, he disappears and Gex rescues his partner, Agent Xtra. It is possible that Rez may still be alive, but he has not been seen since then.

Prior to the events of the game series, Rez fall in a scrap heap in an attempt to steal a cable.[1] Eventually, Rez created his own television empire with several installations claiming lord from his world called Media Dimension.[2][3] He continued his expansion controlling various TV channels to be part from his world, the Cemetery for example was the scenery where Abbot and Costelo met Frankenstein and other monsters.[4]

In first game, Rez needed a mascot for his empire's network where he sends a robotic fly to Hawaii and the chosen one was Gex where the same swallowed his fly.[5] When he is confronted by Gex, Rez tries to attack him with remote controle as boomerang, beams, cyclone spin and lasers until he was defeated by being hit with Gex's spit. Rez is transformed in a energy sphere.

In second game, Rez has his dossier discovered by government agents where this time he is wanted and Gex is his opposition.[6] He had help from several minions in his reformed empire until they were eliminated by Gex one by one, such as: The Tiki Brothers, Mooshoo Pork and Mecharez.[7][8][9]In the final battle, Rez attacks swooping, shooting missiles, increasing in size to attack with his own hands and firing lasers until he is defeated when he is electrocuted in his first phase and hit by giant TVs in the second. Rez is trasformed in a energy sphere again, but this time is trapped in a TV. Rez claims he is Gex's father, but all the same Gex doesn't believe it and turns off the TV, despite Rez trying to bargain with him by getting him a meeting with someone's fiancee he claims to know.

In third game, Rez is seen on a pirate ship in the opening where he picks up his spyglass to look for Gex. In the adventure that takes place, Rez kidnaps Agent Xtra to lure his enemy out, orders the Mobsters to imprison Cuz and spreads chaos in the Media Dimension with his space station. [10][11] In the final battle that follows, Rez attacks Gex with missiles, ramming, create shockwaves and use his cyclone spin until he is defeated when is hit on abdomen by Gex's spit. Unlike the previous two games, parts of Rez's body explode and he falls into a liquid noise pit. He is therefore presumed dead, as he hasn't been seen since.

Rez's appearance has changed over the course of the series, with each form having consistent characteristics frim previous ones.

Rez's form in Gex is much thinner and sleeker than his later designs; Rez is purple in this design. Rez does not have any legs, he travels by hovering. The back of his head is full of liquid noise; there is a large, sharp blade at the back of his head; Rez has several large, sharp teeth; his right eye is a test pattern, while his left eye is a film leader. This design is the only one where Rez wears a cloak; there is a circle on Rez's abdomen. His arms have several spikes all along them; his hands look skeletal.

In Enter the Gecko, Rez went under a massive redesign. This new design is much larger, and a more dangerous appearance; he is also mostly dark gray with holes in the armor. Rez now has sharp-bladed missile launchers on top of his shoulders, which seem to have heart monitors on them; their usage was only implied as the camera would change to his point-of-view when they are being used. His arms no longer have the spikes along them; his fingers now appear to be made of fire. His head is mostly unchanged from his original form; he now has more organic-looking eyes; the liquid noise on the back of his head is now a pulsing, blue sphere. Wires can be seen all around his head and waist. Rez still has no legs, though instead of just hovering, there is a large flame burning. What appears to be lizard skin can be seen on certain parts of his body, this is most noticeable around his chest and arms.

Rez's form in Deep Cover Gecko is somewhat of a mixture of his two previous forms. Rez still has the larger form from Enter the Gecko, though several aspects of his Gex form can be seen, such as; Rez's right eye is a 1, while his left is a 2. Rez still has the sharp-bladed missile launchers which he first used in Enter the Gecko, though their usage is made clearer in this game. The circle on his abdomen returns, though it now has armor, as it is Rez's one weak spot which becomes exposed when using his missile launchers. While Rez had one flame that kept him hovering, he now has four smaller thrusters to do this job.

This is a list of all of Rez' powers and weapons seen in throughout the series.

Gex's father is mentioned in the Gex instruction manual as "Dad". He works for NASA and is always doing research. He and ten other volunteers were chosen to see if they would eat tapioca pudding in zero gravity. However, their rocket exploded due to a Band-Aid floating in one of the fuel tanks, killing them. His death devastated his family, and resulted in Gex's love for TV after he spends most of his days in front of the screen to deal with his death.[12]

In Enter the Gecko, after Gex defeats Rez, Rez says that he is Gex's father. Gex, in doubt, asks how that's possible, and Rez explains, "It's true. I didn't always look like this; I fell into a scrapheap, while trying to get free cable.". To this day it is still not known whether Rez truly is Gex's father, though in the special ending of the U.S. version of Enter the Gecko, Gex says: "Dad is a megalomaniac TV Killer who happens to dress as the tin man." Also in the ending of the PS1 version of Deep Cover Gecko, Gex makes a sarcastic comeback to this ("That's my dad! Good thing I got you out of there when I could/did!"). The Deep Cover Gecko novelization reworks the whole concept.

Years later, during an April Fools takeover event in 2019, the official Crystal Dynamics Twitter account made a reply to a commenter questioning Gex's absence in recent years, saying "Rez put him in time out", which could be a reference to this.[13]

Throughout the series, liquid noise is seen all around Rezopolis. The game manuals and the Deep Cover Gecko novelization describe it is as the very essence of Rez.

The following section is Rez's quotes heard from Gex: Enter the Gecko in the Playstation version (Nintendo 64 version has less quotes because CDs have more data than a cartridge). A majority of them are heard in Channel Z although some quotes can be heard outside the level (When entering a boss channel except Mooshoo Pork, and touching a gate that hasn't been unlocked). The Rez quotes when the player hasn't unlocked any gates or entering a boss channel can still be heard if you activate the "Blabbermouth Gex" cheat.

When entering on bosses TV 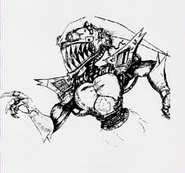 Concept art of Rez as seen in Gex: Enter The Gecko 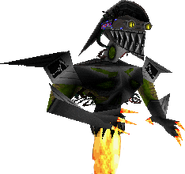 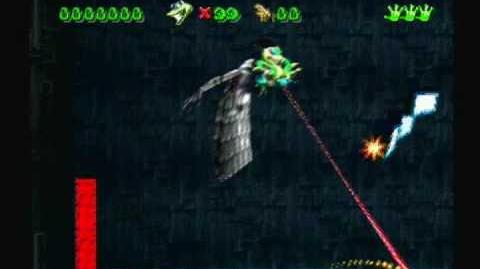 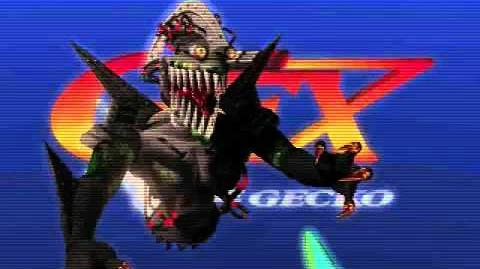 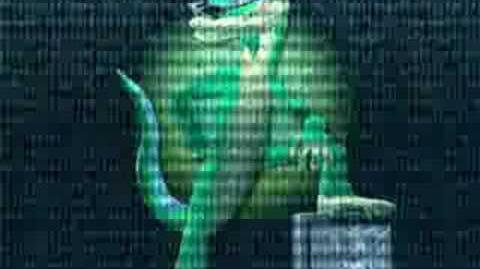 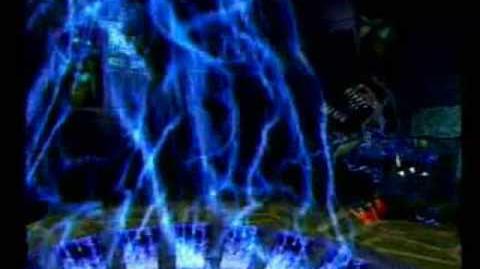 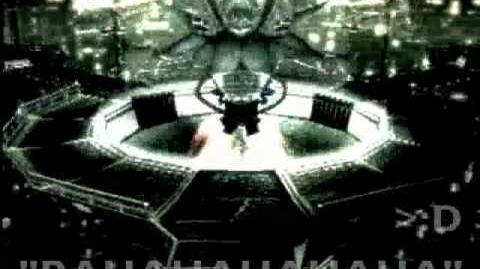 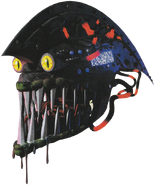 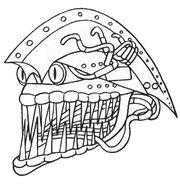 Rez's Head from How To Draw book

Rez from How To Draw book 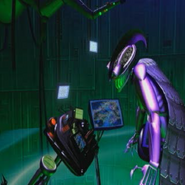 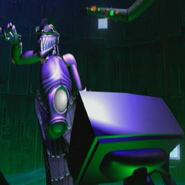 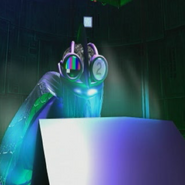 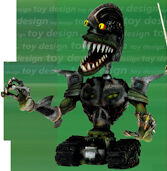